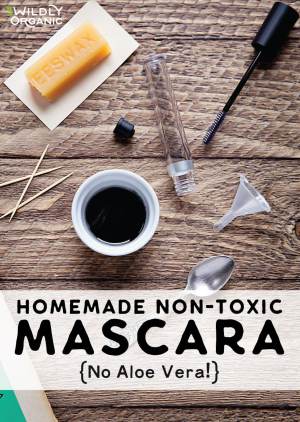 In the natural world, we often strive to make everything ourselves. From homemade cereal and pudding cups to DIY mascara, makeup, and body scrubs, making things ourselves takes more time, effort, and learning new skills. It's worth every minute as you begin to understand what goes on your body also goes in it. I heard somewhere that it only takes 26 seconds for anything you put on your skin to be absorbed into your bloodstream. So lotions, soaps, makeup, perfume, it's all making its way inside. That makes you think, doesn’t it?

A Short History Of Makeup

Oh, that crazy makeup! Humans have been applying colors, powders, and potions to their skin for thousands of years. The ancient Egyptians wore kohl-colored eyeliner to protect them from the sun's harsh rays. Yet this also gives us a picture of the stereotypical, dark-eyed Egyptian images we conjure up. Ancient Japanese women wore lead-based powder to make their skin appear ghostly white. This showed they were "dainty" and ready for marriage. Super pale skin meant they weren't working in the fields with skin tanned by the sun.

Closer to home, colonial women and men powdered their skin to show they were above working in the fields. They wore powder on their faces, in their wigs, and on their legs. Because these powders were lead-based, they also got a hefty dose of heavy metals, which, of course, were absorbed through the skin and into the bloodstream.

Thankfully, we no longer powder ourselves to translucence. Makeup is often worn to either enhance a natural glow or to create a glow when we look tired or worn out. We play eyes up with shadows, concealers, and mascara to make them stand out and look bright.

What's in that tube of drug store mascara, anyway? Parabens, aluminum powder, and propylene glycol are among the most common ingredients. We put those ingredients near our eyes, all for the sake of long, luscious lashes. These ingredients are a growing concern and have been linked to cancer, impairing the body's natural ability to excrete toxic mercury and even causing skin irritations in some individuals. Doesn’t it make more sense to create DIY mascara?

For those with short or blonde eyelashes, mascara is almost a necessity. I have a fair complexion and blonde hair, and people sometimes ask me if I'm feeling unwell when I go without mascara. No one wants to put potentially dangerous toxins near our eyeballs, but that doesn't have to mean saying goodbye to mascara. That’s where this recipe for mascara comes into the picture!

We can remedy this issue with homemade mascara that works just as well as the toxic, expensive stuff. First, here’s what doesn't work: recipes with aloe vera gel that are supposedly nourishing for the eyelashes. I wound up looking like a raccoon every time I sneezed with that DIY mascara! One recipe contained egg yolk. It flaked all over the place and wore off within a couple of hours.

This recipe works well for me so far. It isn't waterproof, but washes off easily with plain soap and water. With just three ingredients, you can have bright eyes naturally!

Here's how to make mascara at home:

I usually use two coats. Simply wash with warm, soapy water to remove. Since this sits near your eyes and is so easy to transfer bacteria, this recipe is designed only for small amounts of mascara. Dispose of any remaining mascara after a week and make a new batch. Store in a covered container to reduce the risk of bacteria contaminating your mascara.

Will you try out this DIY mascara? Do you make your beauty products and makeup?