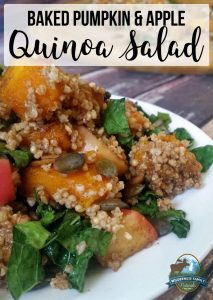 Are you ready for your dish to steal the show at the Christmas table this year?

Then behold — the side dish that will be a standout on its own — Baked Pumpkin and Apple Quinoa Salad.

Don’t be fooled. Just because it’s a salad does not mean it doesn’t have some spunk.

And just because Halloween and Thanksgiving have passed does not mean pumpkin season has ended. Pumpkins and pumpkin recipes are still going strong!

For me, this recipe is about prolonging the pumpkin theme for as long as possible. Because let’s face it, I’m obsessed.

If you’ve only ever used pumpkin when it comes in a puree from a can, then it’s time to change all that.

Pumpkins are one of the most versatile foods. You can mash, puree, boil, steam, saute, deep-fry, bake, and make it sweet or savory. Once you stumble upon the rabbit hole that is pumpkin-everything, there’s no going back.

But here’s where it starts to heat up. Quinoa and pumpkin are a match made in heaven. With quinoa’s natural nuttiness and pumpkin’s natural sweetness, I think food babies are about to be conceived.

Tying them together with apple is a smart move, too.

Firstly, baking the pumpkin and apple brings out their natural sweetness. Secondly, it’s a healthy salad that will win over even the anti-salad crowd. Because it doesn’t really look like a salad.

How do you feel about pumpkin, quinoa, and apple together? Will you be taking this Baked Pumpkin and Apple Quinoa Salad to any holiday gatherings?

Baked Pumpkin & Apple Quinoa Salad
Quinoa and pumpkin are a match made in heaven. With quinoa's natural nuttiness and pumpkin's natural sweetness, I think food babies are about to be conceived.
Servings4 people as a side dish
Prep Time1 hour
Ingredients
Salad
Dressing
Instructions
Recipe Notes

A note about pumpkin pie spice: I've provided a spice combination to mix with the pumpkin and apple that you can use to make your own if you don't have the pre-made mix. It's more cost-effective to make your own. You can adjust the ratios of the spices to suit your taste. I love cinnamon and tend to add more of it.

If you want to make it a complete meal, add some chicken and avocado.

While the ingredients are mostly baked, it's great served warm or cold.