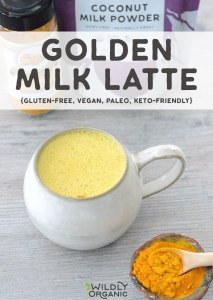 If you’re trying to cut back on caffeine, a golden milk latte might be a good option for you. Sometimes also known as a turmeric latte, there’s no espresso involved in this drink! Instead, the main component of this drink is turmeric! Combined with creamy coconut milk, coconut oil, and warm spices like cinnamon, it’s a tasty hot beverage to start your day off right. If you’ve never tried a golden milk latte before, you’re in a for a treat!

Golden milk lattes have grown in popularity over the past few years, and for good reason; they contain turmeric which has powerful anti-inflammatory properties. Since inflammation is the root of many diseases, it’s great to include anti-inflammatory foods into our diet.

And if we can get anti-inflammatory benefits from a tasty drink, all the better!

The main component of turmeric that fights inflammation is curcumin. When it comes to curcumin, it’s important to note that it doesn’t absorb well into the bloodstream without a little help. However, piperine (an alkaloid) increases the absorption of curcumin (source).

The good news is, black pepper contains piperine, which is why we add a pinch of it to our turmeric latte recipe.

Fat also helps the body absorb curcumin. Because of this, a few teaspoons of Wildly Organic Coconut Oil are added to our latte.

Besides reducing inflammation, WebMD suggests that turmeric may also be effective against:

Now, we know the benefits of turmeric, let’s talk about making it into a tasty beverage.

Turmeric is not overly palatable on its own, at least not in a latte. For this reason, we are including a few extra spices to make it flavorful. Namely, cinnamon, nutmeg, and ginger (along with a little honey or Wildly Organic Coconut Syrup).

This combination tastes like a twist on pumpkin pie spice.

The great thing about this turmeric latte recipe is that it is almost instant. We are utilizing the convince of Wildly Organic’s Coconut Milk powder in order to add dairy-free creaminess and make this a breeze to put together.

As previously mentioned, black pepper and coconut oil are included to aid in the absorption of turmeric. The coconut oil also adds beneficial fats which are great for your brain, metabolism and blood-sugar stability.

For more information about the benefits of coconut oil see our post on The Number 1 Clinical Benefit of Coconut Oil Even Doctors Can’t Ignore.

Because of the number of spices include in this latte recipe, it’s important to use water that is just below boiling and a whisk in order to help the spices dissolve.

A small milk frother also works well to blend the spices and add a little froth.

If you prefer a frothier latte, pour all of the ingredients into a blender and pulse to combine (you’ll get a lot more froth that way).

If you do use a blender, please be extremely careful as hot water can spurt out if it is over-filled.

Choose high-quality turmeric in order to get the most benefit out of this beverage.

This golden milk latte is gluten-free, dairy-free, vegan, paleo and even keto friendly! To make it keto, you can either omit the sweetener or opt for a keto-friendly sweetener. Wildly Organic Coco Monkey Sweetener is a great low calorie option!

Will you try this Golden Milk Latte with honey or coconut syrup?

Golden Milk Latte
If you're trying to cut back on caffeine, a golden milk latte might be a good option for you. Sometimes also known as a turmeric latte, there's no espresso involved in this drink! Instead, the main component of this drink is turmeric! Combined with creamy coconut milk, coconut oil, and warm spices like cinnamon, it's a tasty hot beverage to start your day off right. If you're never tried a golden milk latte before, you're in a for a treat!
Servings1 serving
Prep Time5 minutes
Ingredients
Instructions
Recipe Notes

*If you prefer a frothier latte, blend all ingredients in a blender.