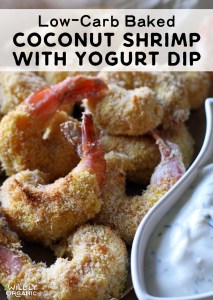 For those who have never had coconut shrimp, it’s probably one of the best ways to enjoy shrimp!

It’s literally shrimp rolled in coconut and cooked to perfection. It may be a favorite takeout food. Yet, it’s incredibly easy to pull off a homemade version that’s just as delicious and much healthier for you.

This grain-free and Low-Carb Baked Coconut Shrimp is just that. Delicious and healthy.

Coconut shrimp makes a great appetizer but can easily be made into a meal by adding a salad or veggie side dish. For ease and convenience, baking this shrimp is the way to go, but you can fry it in Wildly Organic’s Refined Coconut Oil for a crisper texture.

When making your favorite take-out meals at home, you have complete control over the ingredients! Typically all-purpose flour and panko breadcrumbs are used in coconut shrimp, but to make this gluten-free and low-carb, Wildly Organic’s Coconut Flour is exactly what we need.

Paprika and garlic infuse the coconut flour with tons of flavor. Because this shrimp is dredged in coconut flour for flavor, this step is really important.

Coconut shrimp can be served with a variety of sauces, like Sweet Chili Sauce or Orange Marmalade or any other awesome sauce! A simple yogurt dipping sauce compliments this recipe if you don’t normally keep those other sauces in your pantry. The creamy yogurt dip really makes the shrimp shine!

What is your favorite dip to dunk this Coconut Shrimp in?