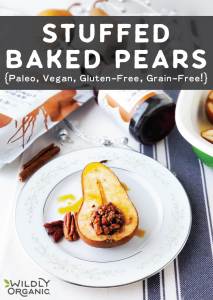 These baked stuffed pears are filled with a seasonally spiced, naturally sweetened nut and dried fruit filling. As they bake they fill your home with the most delicious aroma. Elegantly presented with a drizzle of coconut syrup, they’re sure to please your dinner guests! Naturally paleo, vegan, gluten-free and grain-free, these spiced stuffed baked pears are a wonderful dessert option this season.

Desserts don’t always need to be fancy and overindulgent. We sure do enjoy those, don’t we? Yet, sometimes a simple fruit-based dessert is the perfect option after a meal. These baked stuffed pears are just what you need! They’re so flavorful and delicious without the need for tons of sugar or fat. With a little bit of spice, a drizzle of Wildly Organic Coconut Syrup, and a nutty pecan and dried fruit filling, these baked pears are the ultimate dessert!

To make the pecan and fruit filling, a good sharp chef’s knife does the trick. You don’t need a whole lot of filling so using a food processor is overkill. However, if you’re making multiple batches of this recipe at the same time, I’d recommend using a food processor. Process the dried fruits first, pulsing until broken down into still fairly large pieces. Next, add the nuts and pulse briefly several times – you want roughly chopped nuts. Finally, mix the seasonings, Wildly Organic Coconut Sugar, and Wildly Organic Coconut Oil together well.

Then it’s time to stuff the pears! Wash and pat dry, then cut the pears in half lengthwise. Leave the stem on or cut it off if you prefer. Using a spoon or melon baller, remove the cores and compost or discard. If the pear halves do not set level cut a small portion off the bottom, round part of the pear until it lays level. Evenly divide the filling among the pear halves, about a heaping teaspoon or so, then arrange in a baking dish. Coat the exposed pear flesh with a bit of Wildly Organic Coconut Syrup mixed with lemon juice and sprinkle with cinnamon.

There are two methods you can use to bake the stuffed pears. One is with liquid in the baking dish and one is without. I’ve made them both ways and really didn’t see much difference. If you’d like to use the liquid method, pour hot water into the baking dish until it reaches a depth of about 1/4″. Whether using liquid or not, bake for 30 minutes. Allow to cool a bit before serving, hot baked pears are very hot! Before serving, drizzle some coconut syrup over each pear.

If you’re just wanting a light dessert, these stuffed baked pears are perfect! Not overly sweet, they are fragrantly delicious with just the right amount of crunch from the nutty filling. For a more indulgent dessert, serve with a scoop of vanilla or butter pecan ice cream. However you choose to serve these beautiful baked pears, they’re a stunning end to a delicious feast!

Will you serve these Stuffed Baked Pears with a big scoop of ice cream?

If making a larger batch pulse the dried fruits in a food processor until roughly chopped then add nuts, coconut sugar, coconut oil, spices, and salt then pulse briefly until well combined and nuts are roughly chopped.