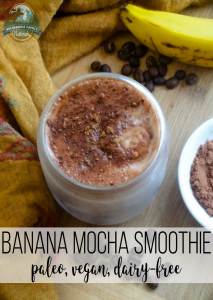 Not quite a “banoffee” but more than just a mocha. A Cacaobanoffee? Or a Mochanana? Either way, it tastes freaking delicious!

This banana, coffee, and cacao combo bring together flavors matched in heaven.

Raw cacao powder is an underrated addition to the morning smoothie. It’s rarely acknowledged for its nutrient qualities but rather, as a base ingredient to our famous friend, chocolate. Being tightly coupled with the show stealer — sugar — it gets a rather bad rap. So I’d like to take a moment to shine the spotlight on raw cacao powder.

You can benefit from raw cacao powder by using it in its unadulterated form (without the high dose of sugar and additives chocolate or drinking chocolate powders are known for). Studies suggest that cacao has higher antioxidant capacity than both tea and red wine (source). It’s also conducive to cardiovascular health, improved glucose metabolism, and lowering blood pressure (source).

Who says you can’t have chocolate for breakfast? Guilt-free indeed.

I prepped this smoothie the night before setting off on a 10-hour interstate road trip. The added caffeine meant I got my morning coffee, a health-kick and satisfying breakfast in one hit. It’s the perfect breakfast on the go for those times when you need to just get up and out of the door.

Some mornings our brains just don’t want to function optimally and have little mental capacity for making both coffee and breakfast. Take heed — without breakfast, your belly will rebel later in the day. The last thing you want is to feed it processed junk from the golden arches.

So if you’re like me on said mornings, do yourself a favor and prepare this healthy but decadent Banana Mocha Smoothie the night before. Just store it in a glass jar in the fridge. When you’re ready to drink, just shake shake shake.

Banana Mocha Smoothie
Not quite a “banoffee” but more than just a mocha. A Cacaobanoffee? Or a Mochanana? Either way, it tastes freaking delicious! This banana, coffee, and cacao combo brings together flavors matched in heaven.
Servings1 smoothie
Ingredients
Instructions
Recipe Notes

Do you want to try this paleo, vegan, dairy-free Banana Mocha Smoothie?