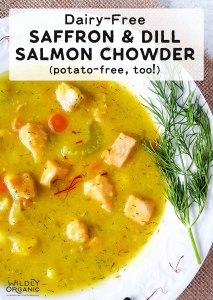 Hearty, warm, and comforting chowders are typically made with milk and white potatoes…

Which may leave you searching for a healthier, dairy-free, and Paleo-friendly version. This lovely Saffron and Dill Salmon Chowder will warm your soul this winter… without the dairy and white potatoes!

What Exactly Makes A Chowder?

The origins of chowder are unclear but the word seems to come from chaudron, the French word for cauldron. Most are made with cream or milk and often include seafood. Vegetarian chowders, such as Midwest Chowder, are also popular.

In the United States, early chowder making is traced to New England. It was a bowl of simmering chowder by the seaside that provided in its basic form “sustenance of body and mind – a marker of hearth and home, community, family and culture”. It is a food which evolved along the coastal shoreline of New England as a “congeries” of simple things, very basic and cooked simply. (Source.)

There are many, many variations of chowder, yet they all have one thing in common — they’re chunky!

Quick and easy one-pot electric pressure cooker recipes — like these Pressure Cooker Mason Jar Berry Cobblers — are great! However, to get that chowder chunkiness you just can’t cook it all in the pressure cooker. Otherwise, all your veggies end up mushy not chowder-like at all.

The magic ingredient to make creamy, dairy-free chowder? Cauliflower! If you have an electric pressure cooker, such as an Instant Pot, use it to cook the cauliflower and speed up your prep time.

No pressure cooker? No problem. Just cook the cauliflower until it is very, very soft so you can puree the heck out of it

While the cauliflower cooks, work on the rest of the chowder and still have this delicious, creamy soup ready in minimal time.

Cauliflower that is pureed to a baby-food consistency is creamy on its own. By adding a bit of powdered, grass-fed beef gelatin, however, you’ll get that super creamy and dairy-like feel in your mouth that you’d expect from a rich chowder.

Gelatin just lends an extra level of velvety smoothness. (Note: I have not tested vegan substitutes, such as agar.)

This Dairy-Free Saffron and Dill Salmon Chowder go perfectly with a salad. Fresh, dark, leafy greens drizzled with pure olive oil and a squeeze of tart lemon juice are a perfect contrast to this creamy, hearty chowder.

If bread is still on your menu, adding a crusty roll with butter would also make this a perfect winter-day meal.

If you can't find saffron, this chowder is still delicious without it!

Powdered grass-fed beef gelatin really makes this soup more dairy-like, but can be omitted if you don't have it.

You can easily reduce the amount of carrots or omit them entirely for a low-carb chowder.

Use bone broth with the fat skimmed for a lower fat version. The added healthy fats in this nourishing soup come out to about half a teaspoon per cup, or about 2.5 grams of fat.