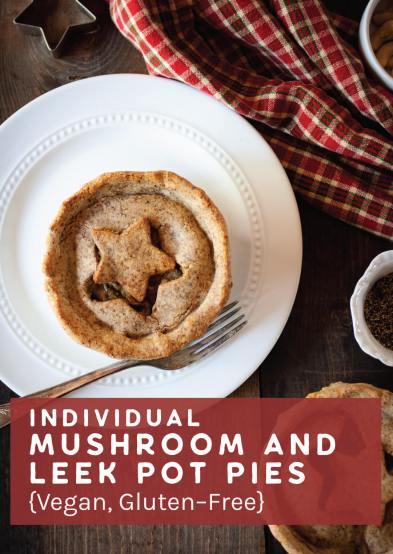 Pot pies are a classic, comforting meal during the cooler times of year. These plant-based, grain-free individual pies are a great way to warm up and feel cozy without compromising flavor or nutrition. These pies are also paleo-friendly and keto-friendly with no added sugar.

Wildly Organic Cashews are the secret ingredient that lends a creamy, dairy-free luxuriousness to the pies. The cashews are soaked in water to soften before being blended into a creamy sauce, adding a delicious richness to the recipe and combining with fresh vegetables like leeks, mushrooms, and kale to form a healthy, hearty filling. Cashews are a great source of nutrients like magnesium, zinc, iron, and protein and pair well with savory as well as sweet dishes. Wildly Organic Coconut Milk Powder adds a hint of coconut flavor and brings an extra depth and creaminess to the fillings.

This vegan pot pie recipe combines almond and coconut flour into a deliciously buttery and wholesome crust. The nutty flavor of Wildly Organic Almond Flour comes through in the crust, with a light coconut flavor from the Wildly Organic Coconut Flour. The combination results in a crust that is easy to handle and roll out while still baking to a crispy texture. These flavors also work very well with the slight coconut tang from the Wildly Organic Coconut Milk Powder in the filling. It is recommended that the crust for each individual pie be rolled out separately, rather than trying to roll out the entire crust and cut individual circles out of it. This crust could also be used for one large pot pie, in which case rolling it all out all at once on a well-floured surface would work well.

More savory dishes to fall in love with: