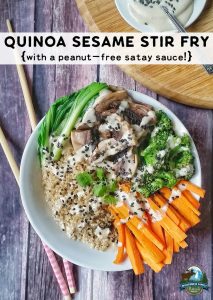 Have you ever thought to use quinoa as a replacement for rice in a stir fry?

Well, it works like a charm! You can thank me later.

Quinoa adds a great nutty kick and an extra punch of protein.

Couple this with a peanut-free satay sauce and you have yourself a whole new rendition of the standard stir fry.

One of my go-to survival tips for a busy week is to have a large container of pre-cooked quinoa in my fridge. Quinoa is perfect for adding to your mid-week meals to help them go that little bit further. It’s so versatile! I sometimes use it as a replacement for rice in sushi, too.

Furthermore, I love to throw quinoa into salads (like this Baked Pumpkin Apple Quinoa Salad). It also makes a great alternative to oats for your morning porridge (like this Coconut Quinoa Porridge).

So really, adding quinoa to a stir-fry was a natural progression.

This Quinoa Sesame Stir Fry is super simple and is a great way to incorporate more vegetables into your diet. Load up on the veggies and add your protein of choice (or leave out the meat for a vegetarian option).

So, you over there with the peanut allergy? I’ve got your back.

Rather than making a traditional peanut satay sauce, I opted for a sesame-based satay. Tahini is just ground up sesame seeds which are commonly used in Asian cooking, so it’s all rather fitting. They are a great source of minerals like calcium, copper, iron, magnesium, zinc, and manganese.

My favorite vegetables to use in a stir-fry are bell peppers, carrots, mushroom, broccoli, and Asian greens like bok choy. But just use what you have in the fridge. Anything goes!

Have you ever used quinoa instead of rice in a stir fry?

Optional: Try marinating some chicken in the satay sauce before adding to the stir fry!