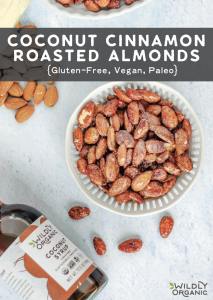 These Roasted Coconut-Cinnamon Almonds are amazing and a new favorite in our home. They are a wholesome afternoon snack or a great addition to a backyard summer party where they will surely leave your guests wanting more. Naturally sweetened with Wildly Organic Coconut Syrup (which is absolutely delicious) and a hint of cinnamon, these healthy roasted almonds are so tasty, you’ll want to eat all of them. I couldn’t keep my kids out of them. They keep asking me to make more.

These cinnamon roasted almonds are so easy to make. Toss the almonds with the coconut syrup and cinnamon and roast them in the oven for few minutes. You can add a touch of salt if you want a sweet and salty treat. My children loved the salty combo the most. This is a great gluten-free vegan snack that even the kids can make.

Wildly Organic Almonds are already soaked and dried, releasing the phytic acid that usually interferes with both digestion and absorption of nutrients. By soaking the almonds, it ensures that the nutrients will be absorbed and that they will be easier to digest. This makes the Wildly Organic Almonds a healthier choice than most almonds on the market.

Wildly Organic Coconut Syrup is an excellent sweetener choice from the myriad of unhealthy choices out there on the market. It is made from the sap of the coconut tree, making a delicious natural alternative to sugar. It can also be substituted for other sweeteners such as maple syrup, honey, or molasses. Aside from using it to make candied roasted almonds, it’s perfect for so many desserts and toppings, like ice-cream, pancakes, and cinnamon rolls. You can also add it to popcorn for a caramel-like taste.  It is a go-to sweetener, allowing you to make magic in your kitchen.