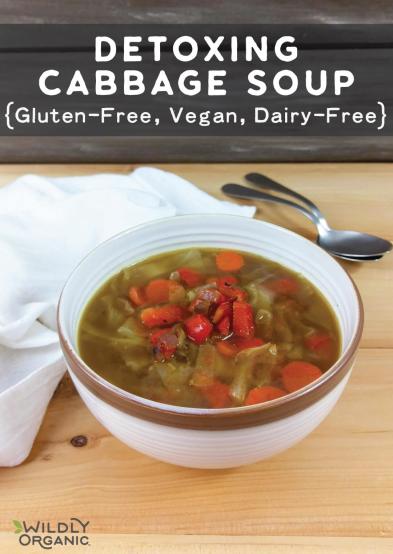 Takeout can be tempting, but it’s usually not a wholesome option. This detoxing cabbage  soup is inspired by Asian flavors, but unlike General Tso’s chicken, is actually full of nutritious ingredients!

Like our creamy cabbage soup recipe, this Asian detox soup features the humble cabbage as it’s base. When I was younger cabbage was relegated to cole slaw and the occasional pork and sauerkraut for supper. I’ve since discovered there are so many other ways to use this versatile (and cheap!) veggie! Did you know cabbage is high in fiber?

Even better, cabbage is a cruciferous veggie that can help lower inflammation and cancer risk. This study found a decreased risk for cancer in general, but especially for lung, stomach, colon, and rectal cancers. And like other cruciferous veggies, cabbage has something called glucosinolate, which helps the liver to detox.

Not only does my health like cabbage, but so does my budget. I try to include at least one cabbage based meal in our weekly meal plan to keep the grocery bill lower. It takes on the flavor of whatever herbs and other ingredients you cook it with, so it’s a versatile ingredient.

Yes, cabbage is awesome, but it can have some unwanted side effects. Cabbage and other cruciferous veggies can cause gas in some people, myself included. I’ve found a delicious and nutritious way to help prevent this smelly situation though. Ginger.

Ginger root is anti-inflammatory, protects against pathogens, and aids digestion. Even better ginger tastes delicious with cabbage. As a popular Asian spice, ginger fits right into this detoxing cabbage soup!

Onion and garlic go into just about every soup I make. They’re not only packed with flavor, but they help the liver to produce glutathione, the body’s main detoxifier. Cabbage also helps the body make glutathione (Source).

Cayenne pepper increases circulation and is warming to bring heat to the extremities. This pepper aids digestion, can help normalize cholesterol and contributes to a healthy heart and circulation system. I’m not a big spicy fan, but I do like a hearty pinch of cayenne in my Asian detox soup. If you like it spicier, feel free to add more (Source).

Hands down one of my favorite ingredients from Wildly Organic is the Hand Parched Wild Rice. My family is gluten free and we usually skip grains in general. So why do I like the wild rice? This unique, non-GMO and non-hybridized wild product is actually an aquatic grass. So for those of us who have issues with grains, or are just trying to give the body a break, this wild rice is perfect.

Need more warming soup recipes? Try one of these recipes!

Will you try this Detoxing Cabbage Soup for dinner this week?